The Huawei Ascend Mate is a massive phone. At over 16 cm tall and 8.5 cm wide, it borders on the brink of being a tablet. To put it in perspective, the 2013 Nexus 7 is 20 cm tall and 11.5 cm wide. But it’s not designed to be a tablet. Hence the rise of the phablet title, which the Mate bares rather well.

The Mate is well made, but not quite on par with the Lumia 920 or iPhone 5. I would call its build quality, good, but not excellent. The rim of the phone lets the package down with a cheap painted plastic. All in all, when you pick the phone up, it feels solid and that’s what counts.

The phone’s interfaces have been well thought through. The micro-USB port is on the bottom, so it doesn’t get in your way when you charge and type. The power button and volume rocker are easy enough to reach with your left and right hands and the headphone jack is well positioned on the top of the phone. Huawei have added a notification light into the front speaker housing. I love having a notification light on a phone and welcomed the inclusion of one on the Mate.

Because of the lack of a removable battery, the SIM and SD card slots are located on the phone’s exterior making them very easy to access. No special tools are required to insert a SIM or microSD card. The Mate’s 6.1 inch screen in contrast to my Lumia 920’s 4.5 inch panel is akin to sitting in a cinema versus watching a DVD. Home movies are fine, but cinema is so much better. The display is crisp and bright, with decent levels of saturation. I would have liked to have seen a 1080p screen, but I can understand that the Mate is designed for a specific price bracket.

The Samsung Galaxy Mega 6.3 and Galaxy Note 2 both don’t feature 1080p screens and they are both more dearly prices than the Mate, so I can see no reason to discredit the Mate for lacking this feature. 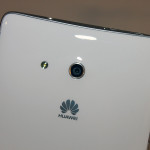 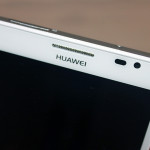 A common misconception with phone hardware is that all quad core CPU’s are created equal. They’re not. While the Mate does have a quad core processor, it isn’t the snappiest of the bunch. This is especially evident with its 3DMark score of 3189, which is in dual core CPU phone territory. The Galaxy Mega 5.8 scores around 4300 points in the same test and it features a 1.4 GHz dual core processor.

Benchmarks aside the Mate copes well with multitasking and gaming. The average user is not going to notice its sluggish qualities till he/she plays some hardware intensive games.

The Mate’s storage capacity is on the low side, with 8 GB of internal storage. The operating system and user interface take just over 3 GB away from that total leaving just under 5 GB for the user. It’s a disappointing feature but not a deal breaker as the base storage can be increased with a microSD card up to 32 GB in size.

The 8 megapixel rear camera is good, but not great. Daytime shots are sharp. Indoor and night time shots are prone to motion blur and require a steady hand to pull off a good photo. Saturation levels are fairly neutral and low light photographs tend to be noisy. 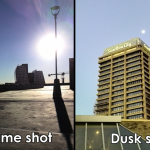 The Mate vs the Lumia 920 indoors 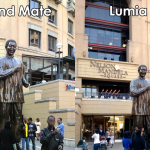 The Mate vs the Lumia 920 outdoors

Having used the Ascend G510 for a two week period, I had the distinct feeling of Déjà vu. The Mate’s camera seems to be an 8 megapixel version of the G510’s 5 megapixel lens. I would have liked to have seen a more impressive rear camera packaged with the Mate.

The front facing 1 megapixel camera is okay. It’s much better than the G510’s VGA front shooter, but still requires sufficient light to pull off a motion blur free video call.

The picture using the front camera 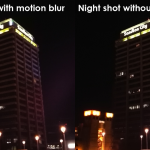 The Mate at night Another feature which the Mate employs that the G510 didn’t sport, is soft Android navigation buttons. Basically, the navigation buttons are virtual, on-screen buttons, instead of being physical hardware buttons. I have no qualms with this, as they can be folded away on demand, to allow for an uninhibited viewing experience.

The back speaker produces fairly average sound volumes. It should suffice for phone calls and playing the odd tune, so long as the surroundings aren’t too noisy.

The Mate’s party piece is definitely its battery. Its 4050 mAh battery is more than twice the size of your average smartphone and as the saying goes, there is no replacement for displacement. Assuming you sleep, this phone will get you through the day no matter how you use it. Under the heaviest use I was able to get 16 hours out of the battery.

Call quality on the Ascend Mate is great and I was especially impressed with its signal strength. The Mate consistently got better signal than my Lumia 920.

It may be a disappointment to some that the Mate doesn’t sport LTE radios, but in all honesty, LTE is a cherry on top, that inflates production costs. The Ascend Mate sits in a segment of the market, where LTE is not a taken for granted feature.

What did disappointment me was the Mate’s lack of NFC. Huawei included it on the Ascend G510 and I can see no reason why it shouldn’t have been included on the Ascend Mate. It’s not a deal breaker but it’s still a sore oversight. 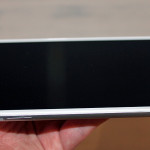 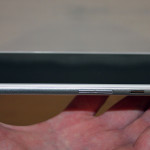 The Ascend Mate runs a skinned version of Android Jelly Bean 4.1. The fact that it doesn’t run Jelly Bean 4.2 is a bit disappointing, but it isn’t going to ruin your experience of the phone. The Huawei Emotion user interface sported on the Mate is very similar to the version on the G510. Huawei has opted for an iOS like experience by removing Androids app tray, so all your apps sit on the home screen. I have grown towards liking the Emotion UI while using the Mate and I must say, I may have been a bit harsh on it in our G510 review.

What is different with the Mate is the fact that one handed typing is going to be a problem with such a big screen. Huawei have thought of this and provided one handed dialing and texting keyboards. They both work really well at solving this problem. The only drawback is that there is no easy way to switch from Huawei’s one-handed keyboard to Huawei’s full size keyboard without using the settings menu.

The Emotion UI offers some fancy looking transitions and interesting themes to keep you entertained. The glitz and glam is great, but I still feel it lacks some polish. There are just elements that could be tied together better. For instance Huawei have provided a great custom lock screen, that includes the ability to open the camera app up directly. But if you opt for this option, you cannot password lock your phone.

So, should you buy the Huawei Ascend Mate if you want a phablet? I could never give you a black and white, “yes” or “no” to that question. The Ascend Mate excels with a great screen and insane battery life, but is let down by its internals and to a lesser extent, its rear camera.

Specifications are on the next page.