The Asus Zenbook UX51VZ / U500VZ with a Touch Screen is a beautiful device. Its aluminium case is solidly constructed and Asus has paid considerable attention to detail with the lid, which has a very Zen circular pattern on it. There is almost no plastic to be seen on the case. The UX51VZ brings a top notch chassis to the field, and can proudly stand firm in the face of the competition.

Its 2.06 Kg weight is a mere 40 grams heavier than the 15 Inch Retina MacBook Pro, which in truth, is its only true competitor. The trade off for having a light aluminium chassis is that the body is scuffed fairly easily. But this is not unique to the UX51VZ, as all aluminium clad notebooks face this problem. 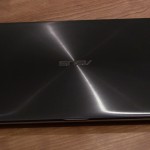 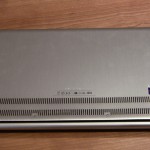 Bottom of the UX51’s case 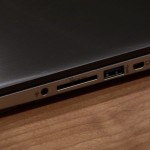 Ports on the right side 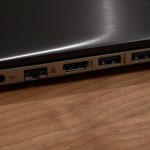 Ports on the left side

The 1080p IPS touch screen, produces rich and vibrant colour and is very responsive to the touch. It can register up to ten touch points and is very fluid when it comes to gesture based commands.

I would have liked to have seen a panel with slightly higher brightness levels, for sunlight viewing, but this is really just being picky as the screens brightness levels are more than adequate.

The UX51VZ truly stands out in the hardware department. It is the lightest quad core Windows machine available on the market and it’s clearly aimed to compete with the Retina MacBook Pro.

With its 8 gigs of RAM, SSDs in RAID 0 and quad core i7 CPU, it scored an impressive PassMark of 3374, which is a mere 2% behind the entry level 15 inch Retina MacBook Pro. This 2% difference is due to its CPU being clocked a little slower than its Apple rival.

The solid state drives are simply astonishing. Using Crystal Disk Mark the UX51VZ achieved sequential reads of 800 MB/s and sequential writes of 650 MB/s. This RAID 0 SSD configuration puts the UX51 into a league of its own.

The downside of this RAID 0 SSD configuration is that the SSDs are proprietary and difficult to acquire. If you plan to upgrade from a 256 GB to a 512 GB SSD configuration, it’ll set you back at least €800. My advice is buy the model with 512 GB of storage if you foresee any problems having 256 GB of storage. The other alternative is to purchase an SDXC card or a USB flash disk to bolster the base storage.

The 8 cell, 70 Watt Hour battery, lasted just short of six and a half hours with the notebook being used in an everyday manner, with the Wi-Fi and keyboard backlight turned on and the screen backlight set to auto. 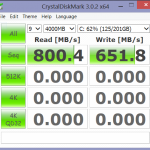 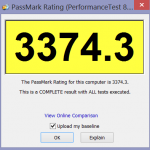 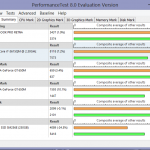 The 102 key backlit keyboard is a pleasure to type on and the keys give one a decent amount of travel for a responsive typing experience. Its back light levels can be made bright enough to even be seen in daylight.

It takes a while to adjust to the position of the arrow keys and the numpad’s zero key is half the usual size, which causes errors when pressing it with one’s thumb. These flaws are a worthwhile compromise, as the inclusion of a numpad is a welcome addition.

The 10.5 cm by 7.1 cm touchpad is more than adequately proportioned to make it one’s primary pointing device. The touchpad’s included gestures, function in a fluid and responsive manner but because the edge gestures use a single finger, one is prone to accidentally activating them. This can be avoided by making sure one’s hand is positioned in the centre of the touchpad at all times.

Unfortunately the touchpad is not on the Apple MacBook touchpad’s level. The one big gripe I have is the occasional jitter that the touchpad exhibits, where it appears to stop tracking momentarily. This is a firmware problem that Asus can fix, but it’s a disappointing quality that hampers an otherwise decent touchpad.

The addition of a touch screen to the UX51VZ adds icing to an already elaborately topped cake. One can see that Windows 8 was designed with a touch screen in mind, as the touch screen on the UX51 has become an integral part of my everyday usage. The 720p web camera is decent if one uses it in adequate light. 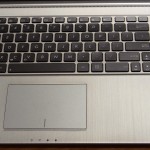 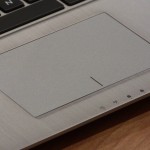 Windows 8 is a very ambitious and risky move by Microsoft. The learning curve of moving from Windows 7 to Windows 8 is fairly steep as a lot has changed.

Initially, I met Windows 8 with some frustration but over the past few weeks, I have fallen in love with the operating system. Working with Windows 7 appears rather boring after spending time using Windows 8.

The touch screen on the UX51 makes the Window 8 experience even richer, as most of the apps in the Windows Store have been designed for a touch enabled device.

The Asus Zenbook UX51VZ with a touch screen is a phenomenal device. It has its flaws, but the flaws are small, and do very little to detract from an otherwise wonderful ultrabook.

The UX51 is on the Retina MacBook Pro’s level. Yes, its screen does not give one the same detail as the Retina MacBook, but it brings other tricks to the party, like its responsive touch screen and blazingly fast SSDs.

Would I buy the UX51VZ if it didn’t have a touch screen? At a lower price, yes, I would. It’s a one of a kind ultrabook and the lack of a touch screen would not detract from the package enough for me to justify looking at its slower and smaller competitors.

The UX51VZ has a rather heavy price, which may put a lot of people off, but its pricing competes directly with the 15 inch Retina MacBook. At R22 000 it is still at least R1000 less expensive than its MacBook foe. I wouldn’t call the UX51 great value for money, but in the light of its premium appeal it’s not wildly overpriced. I give the Asus Zenbook UX51VZ with a touch screen a 9 out of 10.